Evidence shows that the earliest inhabitants of the bluffs and rolling hills of Solana Beach, arrived in 9000 BC.  Now known as the San Dieguitos, they were hunters of mastodons, giant bison, and camels.  Another wave of inhabitants arrived in 7000 BC and are now referred to as the La Jollans. They lived in small bands along the coast and around the lagoons, where they collected seafood and gathered seeds until they were absorbed by the Kumeyaay-Ipai who arrived from the Colorado River area.

The Kumeyaay practiced animal husbandry and created clothing and shelter that varied with the seasons.  They had a complex pattern of land ownership and division of labor that included a network of agricultural holdings that were cultivated on a seasonal basis.  As sophisticated environmental managers of their land and water resources, the Kumeyaay employed a variety of erosion control systems and complex techniques of controlled burning. Their methods of water management kept water from the many springs and surface streams at usable levels for their husbandry and native grain agricultural systems.  As plant specialists, the Kumeyaay tested plants for subsistence, medicinal or technical purposes and used seeds, vegetative cuttings in every location.

The Kumeyaay flourished until the Spanish arrived in 1769 led by Don Gaspar de Portola who led the establishment of missions founded by Catholic priests of the Franciscan order to convert the Kumeyaay and other native inhabitants, against their will, into Christians and Spanish citizens. The missionaries forced the numerous tribes and bands to live in settlements called “reductions,” tearing them from their homelands and disrupting their traditional way of life.  And a significant number of Kumeyaay also died due to the introduction of European diseases.

Control of the area passed from Spain to Mexico in 1821, then following the Mexican War with the United States, California was officially absorbed by the Union on September 9, 1850.The County of San Diego was established by the State Legislature on February 18, 1850 and the first homesteader arrived to the area in 1862. 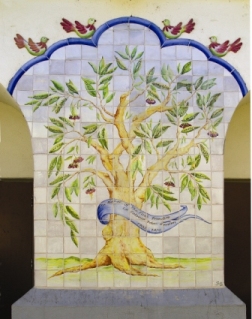 In 1927, the nearby planned community of Rancho Santa Fe was formally established, and a section of its covenant read: “No part of said property shall be sold, conveyed, rented or leased in whole or in part to any person of an African or Asiatic race or to any person not of the white or Caucasian race.”  This racial restriction was finally purged from the document in 1973, but it meant that racially segregated communities needed to be established elsewhere to house the mostly Mexican American workers required to maintain Rancho Santa Fe’s estates.  While Rancho Santa Fe was being built into modern Spanish-style mansions, the residents of La Colonia first had to live in tents before finally getting the materials to build their own homes. The neighborhood created by these workers of mostly single-level adobe residences is considered the oldest neighborhood in Solana Beach and is called La Colonia de Eden Gardens.

The community flourished and was home to local food markets and eateries that are still open today and are run by descendants of the original owners.  The tightly knit community with deep roots comes together for many causes to support the community and preserve its multi-generational history and charm including the hosting of an annual Dia de los Muertos celebration. The Tree of Life tiled wall located at La Colonia Community Center and the Solana Beach Heritage Museum offer glimpses of additional history of the families who lived in La Colonia de Eden Gardens. Many residents of this area today are direct descendants of the first families. 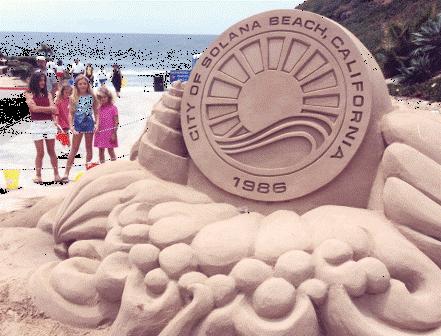 In 1918, the area began to grow with the building of the Lake Hodges Dam. Then in 1922 Colonel Ed Fletcher, an early community leader and developer, purchased 201 acres at $200 per acre from farmer George H. Jones to develop the town of Solana Beach.  Fletcher's goal was for his new community to be the regional commercial center for Del Mar, Rancho Santa Fe and Solana Beach.  The goal was never realized when the former two communities overturned the original severe restrictions imposed on commercial development in those towns.  Nevertheless, Solana Beach grew rapidly paralleling the development of the entire county during the 1924-29 period.

To provide access to the beach, hydraulic water pressure was used to break up the hard pack and create a notch in the bluffs above the beach. This took one man three months with a fire hose, using water that was coming over the spillway at Lake Hodges Dam.   The loose sand was scooped up by steam shovel and trucked to the surf line where it was washed away. The beach was opened with great fanfare, including horse races on the beach on July 4th, 1924.

For his "commercial center" Fletcher opened the Bank of Solana Beach, which he subsequently sold to the Bank of America. Other businesses provided by Fletcher were a train station, a Ford agency/garage, a grocery store and a hotel.  This prompted the development of many additional businesses on the Plaza, Highway 101 and Cedros Ave.

The City of Solana Beach was incorporated in 1986 and includes the original neighborhood of La Colonia de Eden Gardens.